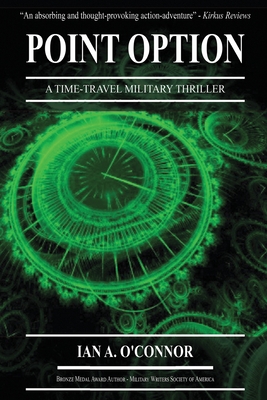 United States Air Force Major Dave Fleming has a job men would kill for. As one of three exchange fighter pilots chosen to fly with the premier US Navy attack squadron aboard America's newest aircraft carrier, little does he know that his life is about to be changed forever

Point Option is a time-travel thriller that unfolds over a tense, six-day period aboard the aircraft carrier Lyndon Baines Johnson on patrol with its Strike Group in the Mediterranean Sea. Suddenly, and without warning, Fleming's hyper-dangerous world of flying off a pitching deck turns into a pilot's worst nightmare.

Point Option is jam-packed with more twists and turns than an out-of-control fighter jet; a world where Major Fleming finds himself an unwitting passenger on a supersonic ride into the deepest unknown destination - a place where even angels fear to tread. The odds for his survival are bleak, and any hope for escape will challenge all the finely honed skills he can muster. It's now become a matter of time; and time is his one commodity that is fast running out