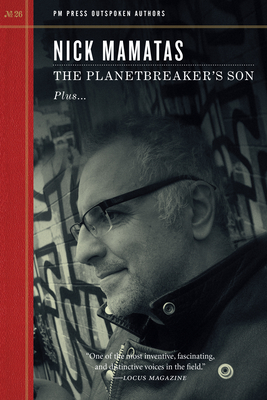 He walks the stars embedded in the virtual dome of night and, when he tires of a world, throws a small black stone over his shoulder—and entire societies blink out of existence. The work is necessary, or so he insists. But the Planetbreaker’s son has his own ideas. Meanwhile, in “The Strange Case Of,” Mamatas gleefully blinks sentimental, shopworn ideas out of easy acceptance. “The Twin Dragons of Sentimentality and Didacticism” explores the dangers and pleasures of Animal Rescue. But listen. That “Ring, Ring, Ring” (and so forth) you hear is the dreaded ouija phone connecting the living with the dead. And it’s for you. Of course we include our predictably unpredictable, outrageously rageous Outspoken Interview with Mamatas. Also for you.

Nick Mamatas is an author, anthologist, editor, and bookseller living in Oakland, California. His early nonfiction about digital culture and politics appeared in magazines such as New Observations, Artbyte, and the Village Voice. Nick’s first novel, Move Under Ground crossed the voice of the Beat movement with the themes of H.P. Lovecraft and became an instant cult classic. His other novels include the radical noir Love Is the Law, the satirical science fiction title Under My Roof, and the PM Press novel Sensation, which both prefigured and predicted the rise and fall of the Occupy movement. Nick’s fiction and editorial work has won the Bram Stoker Award and has been nominated for four other Stokers, two World Fantasy awards, two Hugo awards, two Locus Awards, and a Shirley Jackson award.