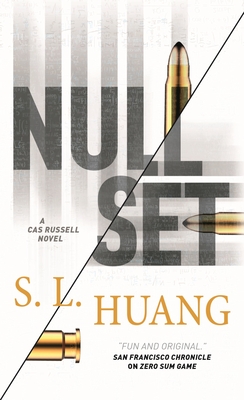 Math-genius mercenary Cas Russell has decided to Fight Crime(tm). After all, with her extraordinary mathematical ability, she can neuter bombs or out-shoot an army. And the recent outbreak of violence in the world’s cities is Cas’s fault—she’s the one who crushed the organization of telepaths keeping the world’s worst offenders under control.

But Cas’s own power also has a history, one she can’t remember—or control. One that's creeping into her mind and fracturing her sanity...just when she’s gotten herself on the hit list of every crime lord on the West Coast. And her best, only, sociopathic friend. Cas won’t be able to save the world. She might not even be able to save herself.

S. L. Huang has a math degree from MIT and is a weapons expert and professional stuntwoman who has worked in Hollywood on Battlestar Galactica and a number of other productions. Her novels include the Cas Russell series (formerly known as Russell's Attic), which includes Zero Sum Game, Null Set, and Critical Point. Huang's short fiction has appeared in Strange Horizons, Nature, Daily Science Fiction, and The Best American Science Fiction & Fantasy 2016.

"This exciting SF thriller sequel to Zero Sum Game keeps up the pace and piles on the tricky twists."—Publishers Weekly

“Action and superhero fans will enjoy this story of a powerful individual struggling with questions of identity and morality.”—Booklist

"Fresh and exciting... a great start to an exciting series--and an exciting career." --Boing Boing

"A smart, calculated action thriller that keeps the reader guessing."—Den of Geek

"Trust us, trigonometry has never sounded so cool."—Paste Magazine

"A fast-paced, darkly humorous read with a lot of heart for fans of action and urban fantasy, as well as lovers of Wolverine and other morally ambiguous, gritty superheroes with a mysterious past."—Booklist, Starred Review

"Fast, furious, and adds up to one of the coolest, most crackin’ reads this year."—Chuck Wendig

"Cas Russell is who I want to be when I grow up. She kicks ass with her fists and her brain—a true twenty-first century action hero. I loved this book."—Richard Kadrey

"Paced at a flat out sprint."—Kate Elliott

“The smartest and thrillingest book you’ll read all year.”—Ken Liu

“A paranormal thriller in which both the action and the questions don't stop....Cas is an awesome antiheroine...exciting, nasty fun...an excellent harbinger for books to come.”—Kirkus