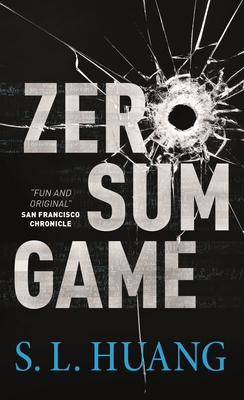 A blockbuster near-future thriller, S.L. Huang's Zero Sum Game introduces a math-genius mercenary who finds herself being manipulated by someone possessing unimaginable power…

Cas Russell is good at math. Scary good. The vector calculus blazing through her head lets her smash through armed men twice her size and dodge every bullet in a gunfight, and she'll take any job for the right price.

As far as Cas knows, she’s the only person around with a superpower...until she discovers someone with a power even more dangerous than her own. Someone who can reach directly into people’s minds and twist their brains into Moebius strips. Someone intent on becoming the world’s puppet master.

Cas should run, like she usually does, but for once she's involved. There’s only one problem...
She doesn’t know which of her thoughts are her own anymore.

"Fresh and exciting... a great start to an exciting series--and an exciting career." --Boing Boing

S. L. Huang has a math degree from MIT and is a weapons expert and professional stuntwoman who has worked in Hollywood on Battlestar Galactica and a number of other productions. Her novels include the Cas Russell series (formerly known as Russell's Attic), which includes Zero Sum Game, Null Set, and Critical Point. Huang's short fiction has appeared in Strange Horizons, Nature, Daily Science Fiction, and The Best American Science Fiction & Fantasy 2016.

“A smart, calculated action thriller that keeps the reader guessing.” —Den of Geek

“Trust us, trigonometry has never sounded so cool.” —Paste Magazine

"Cas Russell is who I want to be when I grow up. She kicks ass with her fists and her brain—a true twenty-first century action hero. I loved this book." —Richard Kadrey

“This book lines up like a perfect, elegant equation—it’s fast, furious, and adds up to one of the coolest, most crackin’ reads this year.” —Chuck Wendig, New York Times bestselling author

“The smartest and thrillingest book you’ll read all year.”—Ken Liu, author of The Grace of Kings and The Paper Menagerie and Other Stories

"Paced at a flat out sprint, Zero Sum Game deploys an astonishing array of weapons together with the prickly charms of its math genius protagonist on her turbulent journey toward trust and connection."—Kate Elliott

"Intense, vivid, and insanely clever, with a great heroine—I couldn't put it down. If only more authors with math degrees used them like this!"—Yoon Ha Lee, New York Times bestselling author

"A fast-paced, darkly humorous read with a lot of heart for fans of action and urban fantasy, as well as lovers of Wolverine and other morally ambiguous, gritty superheroes with a mysterious past." —Booklist, Starred Review

“A paranormal thriller in which both the action and the questions don't stop....Cas is an awesome antiheroine...exciting, nasty fun...an excellent harbinger for books to come.” —Kirkus