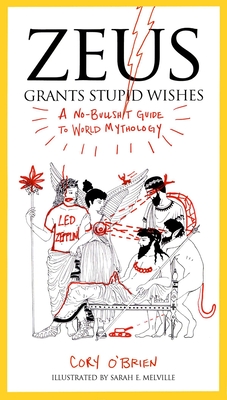 From the creator of Myths Retold comes a hilarious collection of Greek, Norse, Chinese and even Sumerian myths retold in their purest, bawdiest forms!

All our lives, we’ve been fed watered-down, PC versions of the classic myths. In reality, mythology is more screwed up than a schizophrenic shaman doing hits of unidentified…wait, it all makes sense now. In Zeus Grants Stupid Wishes, Cory O’Brien, creator of Myths RETOLD!, sets the stories straight. These are rude, crude, totally sacred texts told the way they were meant to be told: loudly, and with lots of four-letter words.

Odin got construction discounts with bestiality.

Isis had bad taste in jewelry.

Ganesh was the very definition of an unplanned pregnancy.

And Abraham was totally cool about stabbing his kid in the face.

Still skeptical? Here are a few more gems to consider:

• Zeus once stuffed an unborn fetus inside his thigh to save its life after he exploded its mother by being too good in bed.

• The entire Egyptian universe was saved because Sekhmet just got too hammered to keep murdering everyone.

• The Hindu universe is run by a married couple who only stop murdering in order to throw sweet dance parties…on the corpses of their enemies.

And there’s more dysfunctional goodness where that came from.

Cory O’Brien is a word-wizard and technojester of the first degree and the creator of Myths Retold! (BetterMyths.com), as well as the author of Zeus Grants Stupid Wishes and George Washington is Cash Money. He reads and writes mythology, science fiction, and computer code. He has camped with gypsies, juggled for food, and driven across the country in a car powered by vegetable oil. Now he lives in Chicago, where he recently graduated with an MFA in writing from the School of the Art Institute of Chicago. Cory's dream is to one day travel to Mars, or at least to own a jacket made entirely of pockets.

"Blessed with the drinking tolerance of Bacchus and the wisdom of Minerva, O’Brien has compiled some of the best of the best in the realm of sarcastic myth telling with his book Zeus Grants Stupid Wishes: A No Bull-Shit Guide to World Mythology." --Fanboynation.com

"I was giggling by the first page and full blown LOLing by the first myth. It’s really that funny. With chapter titles like “Cronus Likes To Eat Babies“, “Abraham Is Totally Cool About Stabbing His Kid in the Face,” and “Odin Gets Construction Discounts with Bestiality,” you can’t help but want to read these retold myths, whether it be from morbid curiosity or a dire need to know what this guy could possibly be getting at with these titles." --Electricfeast.com

"O'Brien's writing is gruff, hilarious...but there's no doubt that he's thoroughly researched his topics. His candor likens to a tirade of Liz Lemon's deranged ex-boyfriend, Dennis Duffy of 30 Rock, had his skull contained a well-read brain." --Chicagoist