We Were Here (Library Binding) 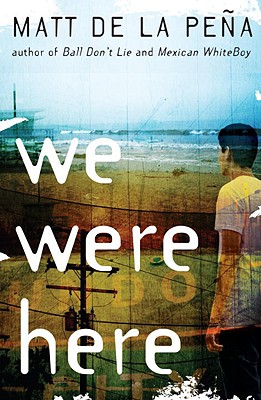 When it happened, Miguel was sent to Juvi. The judge gave him a year in a group home—said he had to write in a journal so some counselor could try to figure out how he thinks. The judge had no idea that he actually did Miguel a favor. Ever since it happened, his mom can’t even look at him in the face. Any home besides his would be a better place to live.
But Miguel didn’t bet on meeting Rondell or Mong or on any of what happened after they broke out. He only thought about Mexico and getting to the border to where he could start over. Forget his mom. Forget his brother. Forget himself.
Life usually doesn’ t work out how you think it will, though. And most of the time, running away is the quickest path right back to what you’re running from.
From the streets of Stockton to the beaches of Venice, all the way to the Mexican border, We Were Here follows a journey of self-discovery by a boy who is trying to forgive himself in an unforgiving world.

"A story of friendship that will appeal to teens and will engage the most reluctant readers."-Kirkus Reviews

" We Were Here" is Matt de la Pena's third novel. He attended the University of the Pacific on a basketball scholarship and went on to earn a Master of Fine Arts in creative writing at San Diego State University. He lives in Brooklyn, New York, where he teaches creative writing. Look for Matt's other books, "Ball Don't Lie," " Mexican WhiteBoy," "I Will Save You," and "The Living," for which he received the Pura Belpre Author Honor Award, all available from Delacorte Press. You can also visit him at mattdelapena.com and follow @mattdelapena on Twitter. "From the Hardcover edition."