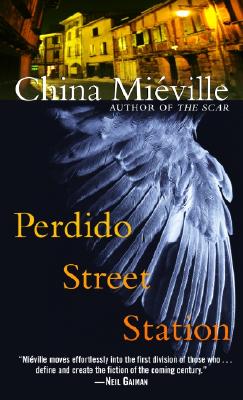 By China Mieville
$7.99
Email or call for price

Beneath the towering bleached ribs of a dead, ancient beast lies New Crobuzon, a squalid city where humans, Re-mades, and arcane races live in perpetual fear of Parliament and its brutal militia. The air and rivers are thick with factory pollutants and the strange effluents of alchemy, and the ghettos contain a vast mix of workers, artists, spies, junkies, and whores. In New Crobuzon, the unsavory deal is stranger to none not even to Isaac, a brilliant scientist with a penchant for Crisis Theory.
Isaac has spent a lifetime quietly carrying out his unique research. But when a half-bird, half-human creature known as the Garuda comes to him from afar, Isaac is faced with challenges he has never before fathomed. Though the Garuda's request is scientifically daunting, Isaac is sparked by his own curiosity and an uncanny reverence for this curious stranger.
While Isaac's experiments for the Garuda turn into an obsession, one of his lab specimens demands attention: a brilliantly colored caterpillar that feeds on nothing but a hallucinatory drug and grows larger and more consuming by the day. What finally emerges from the silken cocoon will permeate every fiber of New Crobuzon and not even the Ambassador of Hell will challenge the malignant terror it invokes . . .
A magnificent fantasy rife with scientific splendor, magical intrigue, and wonderfully realized characters, told in a storytelling style in which Charles Dickens meets Neal Stephenson, Perdido Street Station offers an eerie, voluptuously crafted world that will plumb the depths of every reader's imagination.

"From the Trade Paperback edition.

China Mieville is currently reading for his Ph.D. at the London School of Economics. His first novel, King Rat, was published in 1998. He lives in England. "From the Trade Paperback edition.""

"[A] phantasmagoric masterpiece . . . The book left me breathless with admiration."
--BRIAN STABLEFORD

"China Miéville's cool style has conjured up a triumphantly macabre technoslip metropolis with a unique atmosphere of horror and fascination."
--PETER HAMILTON

"It is the best steampunk novel since Gibson and Sterling's."
--JOHN CLUTE